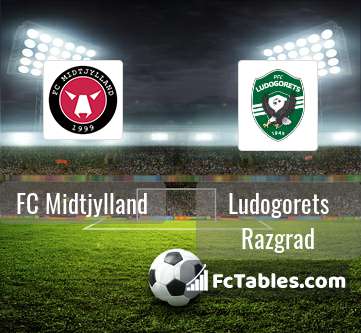 Kick off FC Midtjylland-Ludogorets Razgrad in Europa League on today 16:45. Referee in the match will be Aliyar Aghayev.

In 0 matches scored goals, an average of goals per game. games ended up winning, draws. defeits. In % matches the total goals in the match was over 2.5 goals (Over 2.5). In % matches the sum of the goals was greater than 1.5 Goals (Over 1.5). In matches FC Midtjylland has not lost the goal. In games, both teams have scored goal. Average goals: per game

In Ludogorets Razgrad not occur in the match due to injury: Wanderson, Cauly Oliveira Souza.