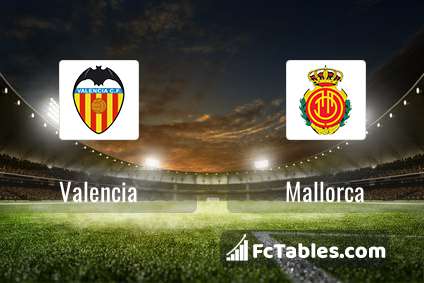 Kick off Valencia-Mallorca in La Liga on today 16:30. Referee in the match will be Jose Sanchez.

Team Valencia is located in the middle of the table. (8 place). Last 5 games (league + cup) finished balance 9 points. Valencia from 2 matches can not beat any rival. From 5 matches no lost a match. Players Valencia in La Liga with the highest number of goals: Edinson Cavani 3 goals, Mouctar Diakhaby 2 goals, Samuel Castillejo 2 goals. Players Edinson Cavani 1 assists will have to be very well guarded by defenders Mallorca, because they have the most assists.

Injuries in the team Valencia: Jaume.

Team Mallorca is located in the middle of the table. (15 place). Mallorca in 5 last matches (league + cup) have collected4 points. From 4 matches can't win a match. The best players Mallorca in La Liga, who scored the most goals for the club: Vedat Muriqi 4 goals, Kangin Lee 1 goals, Antonio Raillo 1 goals. Players with the most assists: , Kangin Lee 3 assists.

Clement Grenier. They will not be able to play in the game due to suspension.