Kick off Sheffield United-Tottenham in Premier League on today 14:00. Referee in the match will be Andre Marriner.

Team Sheffield United is in the releagtion zone of the table. 20 position. In 5 last matches (league + cup) team gain 4 points. To defend Tottenham the most demanding players will be David McGoldrick 4 goals, Billy Sharp 2 goals, Sander Berge 1 goals, because this season they scored the most goals for Sheffield United of the entire composition. Players with the most assists: David McGoldrick 1 assists, Sander Berge 1 assists.

Team Tottenham is located in the middle of the table. (6 place). Tottenham in 5 last matches (league + cup) have collected5 points. From 4 matches away can't win a match. from 3 matches team have not been defeated. The best players Tottenham in Premier League, who scored the most goals for the club: Heung-Min Son 12 goals, Harry Kane 11 goals, Tanguy NDombele Alvaro 2 goals. Players with the most assists: Heung-Min Son 5 assists, Harry Kane 11 assists, Tanguy NDombele Alvaro 1 assists. 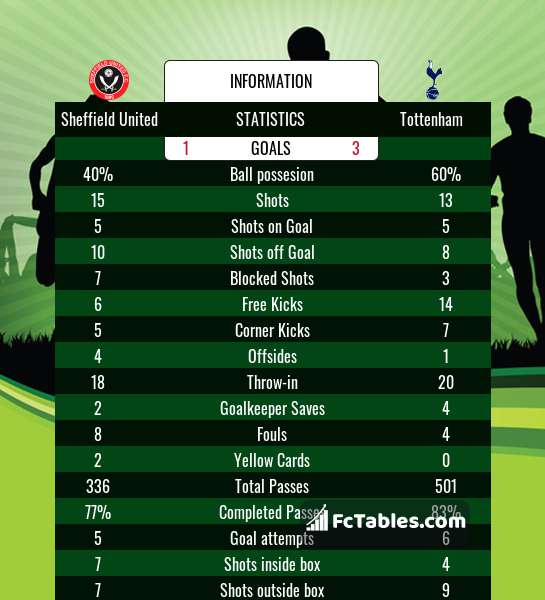