The match PSG-Guingamp Ligue 1 will start today 16:00. Referee in the match will be Amaury Delerue.

Team PSG is at the top place in the table (1 place). PSG in 5 last matches (league + cup) have collected11 points. To defend Guingamp the most demanding players will be Kylian Mbappe Lottin 14 goals, Neymar 11 goals, Edinson Cavani 11 goals, because this season they scored the most goals for PSG of the entire composition. Most goals developed: Kylian Mbappe Lottin 3 assists, Neymar 5 assists, Edinson Cavani 1 assists.

Team Guingamp is in the releagtion zone of the table. 20 position. Form team looks like this: In the last 5 matches (league + cup) gain 6 points. Leading players Guingamp in Ligue 1 is: Marcus Thuram 7 goals, Nicolas Benezet 3 goals, Nolan Roux 2 goals. Players Marcus Thuram 1 assists, Nicolas Benezet 1 assists will have to be very well guarded by defenders PSG, because they have the most assists. 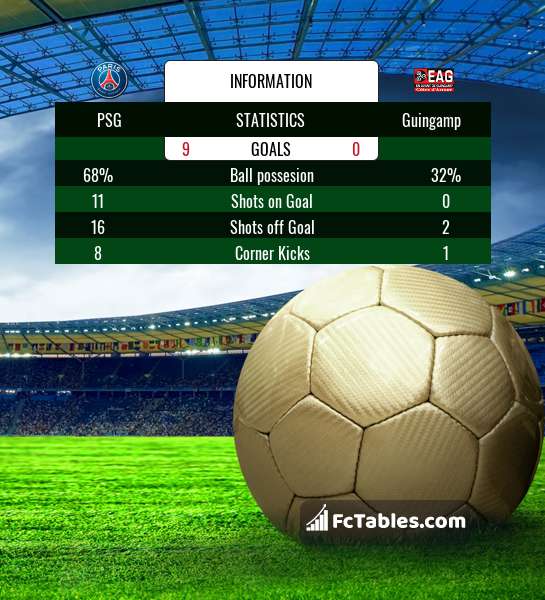