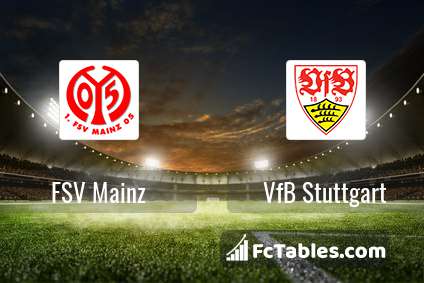 Team FSV Mainz is located in the middle of the table. (14 place). FSV Mainz in 5 last matches (league + cup) have collected0 points. Players FSV Mainz in 1. Bundesliga with the highest number of goals: Jean-Philippe Mateta 1 goals. Players , Robin Quaison 1 assists will have to be very well guarded by defenders VfB Stuttgart, because they have the most assists.

Team VfB Stuttgart is located in the middle of the table. (13 place). Form team looks like this: In the last 5 matches (league + cup) gain 0 points. To defend FSV Mainz the most demanding players will be Sasa Kalajdzic 1 goals, Silas Wamangituka Fundu 1 goals, because this season they scored the most goals for VfB Stuttgart of the entire composition. Most goals developed: , Daniel Didavi 1 assists.