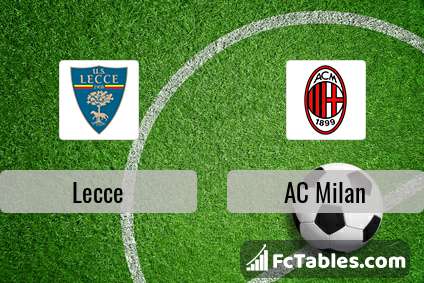 The match Lecce-AC Milan Serie A will start today 11:30. Referee in the match will be .

Team Lecce is in the releagtion zone of the table. 18 position. In 5 last matches (league + cup) team gain 9 points. From 2 matches can't win a match. In this season games Serie A the most goals scored players: Marco Mancosu 8 goals, Gianluca Lapadula 7 goals, Filippo Falco 3 goals. They will have to be well guarded by defense AC Milan. Players Marco Mancosu 1 assists, Filippo Falco 3 assists will have to be very well guarded by defenders AC Milan, because they have the most assists.

Team AC Milan is located in the middle of the table. (7 place). AC Milan in 5 last matches (league + cup) have collected5 points. From 2 matches can't win a match. The best players AC Milan in Serie A, who scored the most goals for the club: Ante Rebic 6 goals, Theo Hernandez 5 goals, Krzystof Piatek 4 goals. Most goals developed: , Theo Hernandez 2 assists.