The match Hertha Berlin-Hoffenheim 1. Bundesliga will start today 13:30. Referee in the match will be Christian Dingert.

Team Hertha Berlin is located in the middle of the table. (14 place). In 5 last games (league + cup) Hertha Berlin get 5 points. From 2 matches can't win a match. Not lost the match from 3 games. In this season games 1. Bundesliga the most goals scored players: Dodi Lukebakio 2 goals, Marco Richter 2 goals, Suat Serdar 2 goals. They will have to be well guarded by defense Hoffenheim. Most assists in the club have: Dodi Lukebakio 1 assists.

Players Rune Almenning Jarstein will not be able to play in the match because of suspension (cards, etc.)

Team Hoffenheim is located in the middle of the table. (6 place). In 5 last matches (league + cup) team gain 10 points. Hoffenheim has not been defeated from 2 matches. To defend Hertha Berlin the most demanding players will be Andrej Kramaric 2 goals, Christoph Baumgartner 2 goals, Munas Dabbur 2 goals, because this season they scored the most goals for Hoffenheim of the entire composition. Most goals developed: Andrej Kramaric 2 assists, Christoph Baumgartner 1 assists. 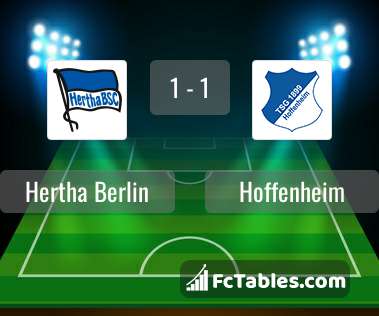