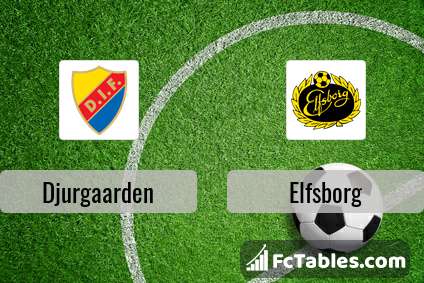 The match Djurgaarden-Elfsborg Allsvenskan will start today 17:00. Referee in the match will be .

Team Djurgaarden is at the top place in the table (2 place). Last 5 games (league + cup) finished balance 10 points. From 3 matches at home no lost a match. Leading players Djurgaarden in Allsvenskan is: Edward Chilufya 5 goals, Aslak Fonn Witry 5 goals, Magnus Eriksson 4 goals. Players Edward Chilufya 2 assists, Aslak Fonn Witry 1 assists, Magnus Eriksson 11 assists will have to be very well guarded by defenders Elfsborg, because they have the most assists.

Team Elfsborg is located in the middle of the table. (5 place). In 5 last games (league + cup) Elfsborg get 6 points. Elfsborg from 2 matches away can not beat any rival. To defend Djurgaarden the most demanding players will be Per Frick 6 goals, Marokhy Ndione 5 goals, Jeppe Okkels 5 goals, because this season they scored the most goals for Elfsborg of the entire composition. Most goals developed: Per Frick 2 assists, Marokhy Ndione 3 assists.