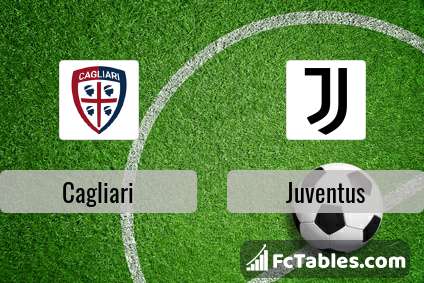 Match Cagliari-Juventus Serie A the fixture is set to kick-off today 16:00 on Sardegna Arena. Refereee .

Team Cagliari is located in the middle of the table. (12 place). In 5 last games (league + cup) Cagliari get 2 points. Cagliari from 11 matches can not beat any rival. Players Cagliari in Serie A with the highest number of goals: Joao Pedro Galvao 16 goals, Giovanni Simeone 6 goals, Radja Nainggolan 5 goals. Most assists in the club have: Joao Pedro Galvao 2 assists, Giovanni Simeone 3 assists, Radja Nainggolan 6 assists.

Team Juventus is at the top place in the table (1 place). In 5 last matches (league + cup) team gain 12 points. from 3 matches team have not been defeated. The best players Juventus in Serie A, who scored the most goals for the club: Cristiano Ronaldo 21 goals, Paulo Dybala 7 goals, Gonzalo Higuain 5 goals. Players with the most assists: Cristiano Ronaldo 3 assists, Paulo Dybala 5 assists, Gonzalo Higuain 4 assists.

Direct matches: usually ended with winning of Juventus. Balace of both teams games are: 2 won Cagliari, 21 wins Juventus, 7 draws. In 14 matches the sum of the goals both teams was greater than 2.5 (Over 2.5). On the other hand, 25 matches teams scored more than 1.5 goals (Over 1.5). In 16 matches the both teams have shot at least one goal.