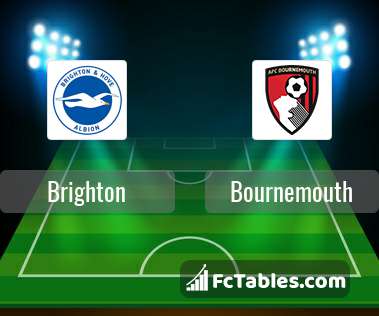 Team Brighton currently is on lower place in table (16 position). Brighton in 5 last matches (league + cup) have collected6 points. Brighton from 2 matches can not beat any rival. Players Brighton in Premier League with the highest number of goals: Glenn Murray 11 goals, Shane Duffy 5 goals, Florin Andone 3 goals. Players , Shane Duffy 1 assists will have to be very well guarded by defenders Bournemouth, because they have the most assists.

Team Bournemouth is located in the middle of the table. (14 place). Form team looks like this: In the last 5 matches (league + cup) gain 4 points. Bournemouth from 3 matches can not beat any rival. To defend Brighton the most demanding players will be Callum Wilson 11 goals, Joshua King 11 goals, Ryan Fraser 6 goals, because this season they scored the most goals for Bournemouth of the entire composition. Most goals developed: Callum Wilson 6 assists, Joshua King 3 assists, Ryan Fraser 10 assists.