With the past season ending few weeks ago and the new one still incoming, the summer break constitutes a good occasion for some analysis, both of the last competition, as well as of the forthcoming one. In this article you can find all the important information Vanarama National League (English 5th League).

Starting from its history, through the summary of the last season and the predictions for the new one, ending on a bunch of handful statistics.

A bit of league’s history

The National League, formerly known also as Alliance Premier League and the Football Conference, was established in 1979. It derives its names because of the complex structure, combining from the very beginning also National League North and South (the equivalent of 6th League). Currently, the National League on its own is the arena for 24 clubs.

An interesting fact concerns the promotion and relegation history. Prior to 1987, in order for National League clubs to enter the EFL, they had to be elected by League members. As a consequence, there was no guarantee that winning the National League would result in promotion, and none of the league's first eight champions were promoted.

The first affected clubs were actually Lincoln City, who had been officially relegated from the National League and was replaced by Scarborough.

There are also certain requirements that have to be met concerning the stadium, its condition and capacity. That is why from 1987 to 1990, each of the winning teams was denied participation in EFL (English Football League – a body, which comprises 2nd, 3rd and 4th leagues).

Nowadays, the league is known as Vanarama National League, due to a sponsorship naming deal, signed with Vanarama, a car leasing company. Last year, Lincoln City won the championsip, earning automatic promotion to the League Two.

Season 16/17 saw a fight for the title until its last round. When we look at England National League Table, we can see that finally, Lincoln City were the ones, who won the championship, finishing 4 points ahead the second Tranmere Rovers. Tranmere, finishing second, could not be secure of their promotion and had to play in the promotion play-offs with the teams from places 2-5.

Unfortunately for them, their fate turned out to be peckish, as they lost the final, playing against Forest Green (who finished the regular season on the third place, earning 86 points). You can see the huge gap between the first two teams and the rest of the league.

There was a 13 point difference between the first and the third team and a stunning 20 points difference between the champion and the first team, which did not qualify for the play-offs. On the other side, we had teams, who struggled for their presence in the league for the next season. 4 teams were relegated: York City, Braintree Town, Southport and North Ferriby United (ending respectively 21st, 22nd, 23rd and 24th).

North Ferriby (24th) and Southport (23rd) gained the same number of points – 39, however North Ferriby 24 had worse goal difference balance. The saddest story is probably connected with York City, who was relegated in the previous season from League Two and now they lost their battle for league maintenance with the local rival – Guiseley, ending the season only one point behind them. 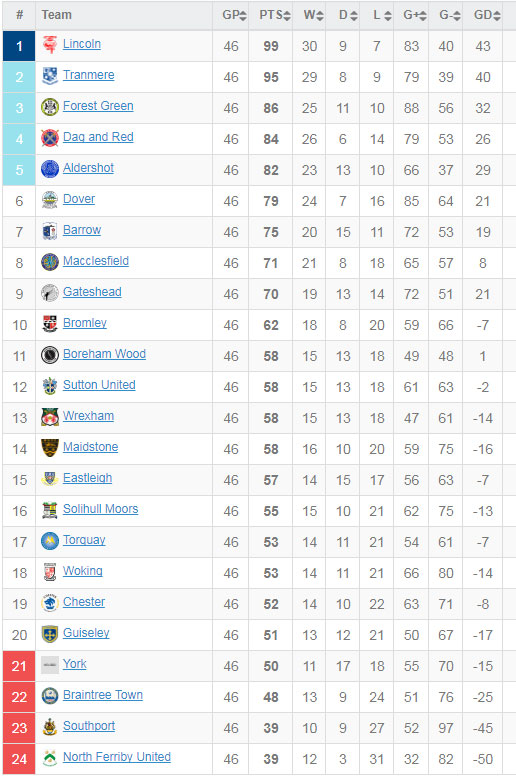 Lincoln City, one of the oldest teams in England, can be proud of its 133 years history. The team has been known in the football world as the Imps or Red Imps, after the legend of the Lincoln Imp. They derive from Lincoln, the capital of Lincolnshire, playing on the Sincil Bank stadium, having the capacity of 10120 spectators. Their last season was particularly impressive for them, as they won the NFL championship and reached quarter finals stage in the FA Cup.

Their biggest achievement is the 5th place the Second Division in 1901–02. Since 1960–61, the team has not played higher than the third tier.

They have won the promotion only a season after the new manager, Danny Cowley, took over the team. It was six years after they were relegated from League Two. Cowley is of course a hero now, admired by all people in Lincoln. However, we should not forget about the fantastic players, who helped the Imps in their way to glory.

The team had the third best attack and defence formation, scoring 83 goals (fourth result in the league) and conceding 40 (also third place in the ranking).

This gave them the biggest goal difference – 43. When we look at the players, who scored goals, we can see that the team was rather a collective than a one man show. Matthew Rhead was the team best scorer, ending the season with 15 goals. Next one was Nathan Arnold, who scored 13 goals.

Then we have Luke Waterfall and Sean Raggett, who find their way to the net 8 times.

Predictions for the next season

As usual, we have to look for the favourites for the final success among the last year relegated teams, so Hartlepool and Leyton Orient, both having considerable traditions in English football’s history. Although we have to have in mind the example of York City, which were relegated two seasons in a row.

Tranmere Rovers will undoubtedly also count in the final settings, wanting to take revenge for the unfortunate ending of the last season. Also Dagenham and Redbridge, Aldershot Town and Dover Athletic (having the second best attacking formation last season) will be fighting for the promotion. It is a lot harder to indicate the teams, which can be relegated.

Apart from the teams promoted from National League North and South, that is: AFC Flyde and FC Halifax Town and Maidenhead United and Ebbesfleet United, also Guiseley or Turquay can face the hard task of maintaining in the league.

As the season starts in the first weekend of August, the teams have been completing their squads. Among the most impressive signings, we saw Rory Fallon, the New Zealand international coming to Turquay United, after spending four years in Plymouth Argyle. Portuguese player, Raul Correia can be also an interesting singing, moving from Blackpool to Guiseley. Among others, also Harvey Reed, from Stoke City reserves to Eastleigh FC.

The 18 years old defender can strengthen Eastleigh’s poor defensive formation. Josh Taylor, a 22 year old midfielder has been bought by Sutton United from OKC Energy U-23, an American lower league youth team. Several players also were released or sold out.

There is a considerable group of fans, for which statistics constitute the most fascinating aspect along with all the comparisons, percentage shares and numbers. If you are one of them, then this section shall appeal to you. The most important data is of course the National League table.

On the other side, we have i.e North Ferriby or Southport, which earned only 39 points. We can also here that Lincoln City won the biggest amount of games – 30, losing only 7, while i.e Southport has won only 10 of them, losing 27. The infamous record of lost matches goes to North Ferriby, however, which lost 31 of them. What is interesting, only 3 of their games ended in a draw.

Here, it is worth to notice the brilliant attacking form of Forest Green, which ended the season with an amazing number of 94 goals, which gave them an average of 1.92 goals per game. The second place goes to Tranmere – 85 goals and 1.73 goal per match and Dover earned the third place here, scoring 85 goals as well, however having played less matches (did not qualify for the play-offs). That is why their average is 1.85.

The current champions, so Lincoln City have the fourth best attacking players, who scored 83 goals, ending the season with the average of 1.80 goal per game. On the other side, we have teams who conceded the biggest number of goals, having the worst defensive formations in the league. The infamous first place here goes to Southport, which conceded 97 goals (that gives an average of 2.11 goals per match!). Next places are occupied by North Ferriby and Woking with respectively 82 goals (1.78 per game) and 80 goals (1.74 per match).

Data, which may be particularly important for those who bet, concerns the most frequent results. Last season 1-1 draw was the most popular outcome, being noted in 64 matches, which stands for 13.1% of all results. In 53 matches we observed a modest 1-0 victory, which stands for 10.8% of all results. Just right after it, we have a 0-1 result, showing that the away team won their matches in such difference 52 times, which gives us the percentage of 10.6%.

Dover’s Ricky Miller was unstoppable this season, declassing his rivals with the fabulous 40 goals he scored. His striking ability decently helped his team to end the season on a high 6th place. He scored almost a half of the team goals – 40 out of 85 and ended the season with an impressive average of 0.8 goal per game.

The second place goes to Christian Dodge from Forest Green, the team who ended the season with the highest number of goals scored.

Dodge scored 27 out of 94 goals for Forest Green, ending the season also with an average of 0.8 goals per game (played in fewer matches than Miller from Dover). Third place goes to James Cook from Tranmere Rovers, who striked 23 goals, which gave him a final average of 0.6 goals per game.

Two players ended the season with 19 goals, which gave them a 4th place. These were respectively Micheal Cheek from Braintree Town and Byron Harrison from Barrow. 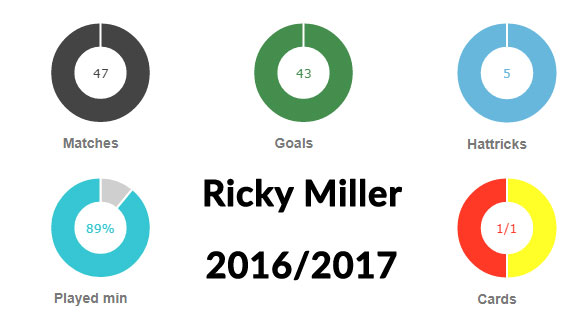 Why should you watch Vanarama National League next season?

The answer is simple. It is hard to find any other competitions, where such passion and commitment can be observed. The fight here is always until the last whistle, regardless the result. That is why there are so many unexpected twist and surprising outcomes. The best example here is the story of Tranmere from last season.

This season, their players would love to take revenge, however they are not the only ones, who have appetites for higher league.

We shall also observe carefully Hartlepool, Leyton Orient, Dag & Red or Dover. The transfer window is opened until the end of August, therefore we can still expect many interesting moves. For sure, the situation in the England National League table would change dynamically, round after round, therefore it is important to check the actual standings regularly, as well as monitor the transfers, friendly matches and then all the regular season’s statistics.

Hi, I see a more engaging and interesting blog on this same legue, Please visit Vanarama National League North Table page for more details, I promise you will be amused if you are a fan of the league. https://thenln.com/national-league-north-table-2/