Definitely the best shooter in the world

Football statistics may not end, because this beautiful sport not only surprises us, but it still makes us want to make new calculations, create more posts, share actions, learn and track the tactics of the coaches leading their teams. Always on the side of victory. Statistics also do not latch, especially those sports. And those that are presented in a solid and reliable way can be the basis for many best press articles or blogs related to soccer. Thanks to such comparisons, the biggest fans get what they always expect - the best news, systematized and collected in one particular place.

Top scorers in the world of football

Of course, in the world of sport, the greatest emotion are being aroused by the best players and the way their careers develop. All the sacrifices they have to make, as i.e. their private life, which they simply do not have, devoting themselves entirely to the world of sport, make them even more admirable icons. It is up to goalscorers themselves to be in the top 10 in the rankings, as it provides not only the prestige and respect of fans, teammates and sponsors, but also provides a great deal of money for bigger contracts.

Not without reason football players train their skills putting their bodies through the hoops. All the effort is well visible in the charts, rankings and statistics, created by passionate fans and experts of the subject.

Top scorer of the world - still the same king

Invariably, for years, the best scorer is Lionel Messi, who plays with the number 10 shirt, representing FC Barcelona, bringing the club many awards. Although the Argentinian player is now 30 years old, he still remains in perfect form and is in the forefront of the world's most expensive footballers, which only a few can afford. For years, he has been a showcase for his team and as a flag player, a kind of sign that the team is recognized in the world at all. It is thanks to him that the team achieves such excellent results in meetings with other teams. Actual top scorers in the world you find here

This fantastic goal machine has already participated in all the major sporting events, including the Champions League, the Spanish League, the King's Cup, team games, club games, the Champions Cup and the Copa America. The statistics of his games are excellent, although he is often sent away by the referee. In all competitions this season, he has played a total of 63 games, scoring a total of 61 goals, having 18 assists and 3 hattricks. He played in total 84% of his time, statistically also counting 80% of accurate passes, having 5.02 shots per game and recording 4.29 shots per goal. Usually he needs 79 minutes to score a goal. In his career he has received a yellow card 10 times, but did not get any red.

Four times he entered the field, and he also went 10 times. In the club competition it is quite good because it statistically shoots 1.02 goals per game. Last season he scored two goals for the game. Coming to Barcelona, as a youngster, he is now playing his 14th season for the club, being a part of 603 official matches, scoring a total of 530 goals. He is definitely one of the best footballers of our times and with the most experience in his profession. 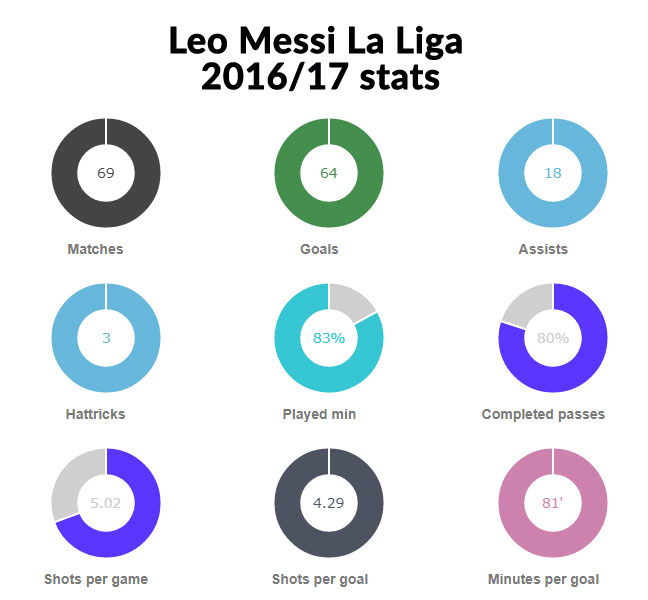 Although this Dutch player, younger than Messi by 2 years, plays for Sporting Lisbon for less than one season, has already won a prestigious second place, statistically shooting the same amount for one meeting as the top scorer - 0.8. In the official season, he was seen in Champions League, Bundesliga, Portuguese League, Portuguese Cup competition, the German Cup, as well as UEFA’s World Qualification Championships, and other national team matches. Let’s look at his statistics from this season. He has played 55 games, scoring a total of 40 goals, counting only one assist, but scored 4 hattricks.. He played 79% minutes of the overall time and his performance was 65%, giving him an average of 2.4 shots. Also, statistically he scored one goal for 12 attempts. This gives him an average of one goal per 98 minutes. He has received 4 yellow cards this season but no reds. The player entered the field 11 times as a sub, 8 came out of it.

Who closes the big three?

Of course the best shooters of the 2016/2017 season could not miss the figure of 26-year-old United Arab Emirates player, Ali Makbhout, who has been playing for Al-Jazira his seventh season. From season to season he presents better form, proving his class. Statistics don’t lie and here you can also see that the average is exactly the same as the previous two players and it is 0.8 goals per game. In the current season, we could watch him in action at the meetings of the UAE, the Asian Champions League and the national team games - the experience of this player on the world stage is therefore less than the previous two shooters, but his results speak for themselves. In the future maybe this player will be at the top because he’s now on his way on reach his highest form, sometimes really amazing all football fans.

In this season, he has played 34 games, scoring 36 goals, having 4 assists, and winning five times! So far this is the biggest achievement among the listed shooters. His team has maintained a clean sheet 14 times, while he was in the lineup, they lost 28 goals, resulting in an average of 0.82 goals lost. Thus statistically it comes out that the team concedes a goal exactly every 88 minutes. He played 80% of the overall possible time, got 7 yellow cards and one red, being subbed out 7 times and subbed in once. 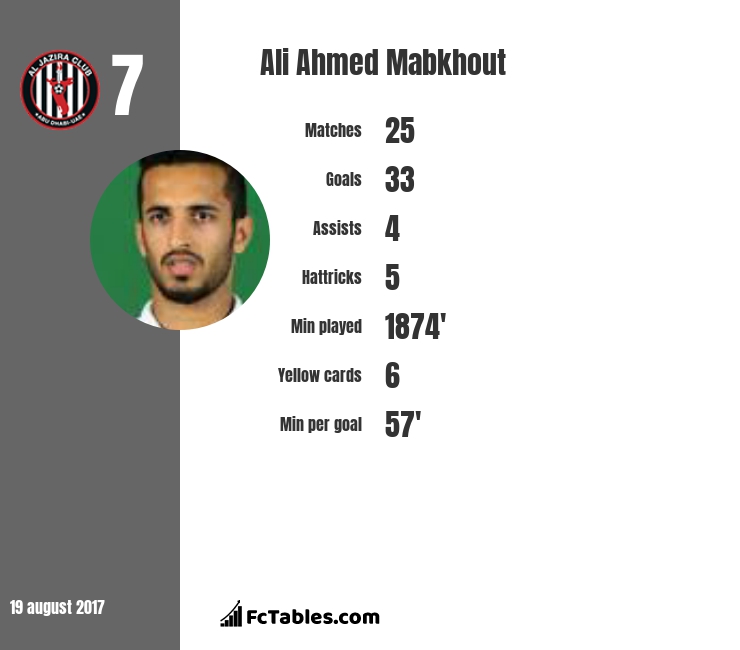 The fourth place among world’s best scorers is reserved for Luis Suarez, Messi’s teammate from Barcelona, playing number with a „9” on the shirt. This 30 years old Uruguayan. He has been playing in Catalonia for four seasons, still showing good fitness and class as an experienced striker. This season we were able to see his 39 goals, coming from 133 shots, from which 63 were on goal. Averagely, he shoots 0.67 goals per game when it comes to club games.

We were able to see him in the, Spanish League, Copa del Rey, Champions League, Uruguayan matches and the Champions Cup and Copa America. He played a total of 59 meetings, noted 17 assists and also scored one hattrick. The average goal is 3.5 shots and 4.29 shots per goalkeeper. The player needs 112 minutes to score goals, he has also received 13 yellow cards, one red and been subbed off 13 times from the pitch.

Another very good, renowned player, who obtained the fifth place, is Edin Dzeko, a Bosnia-Herzegovina player, who plays for AS Roma with a number 11 on his shirt. Playing his second season for Rome, he took part in 99 matches, scored an impressive number of 59 goals. This season was pretty remarkable for him, as he scored 47 goals in all club competitions, adding 4 goals for the national team. Apart from it, he helped his partners with 10 assists. All in all, he spent on the pitch 5489. His impressive average speaks best about his scoring abilities, having 0.82 goals per game this season, which is a huge improvent compared to last season (0,33 goals per game). 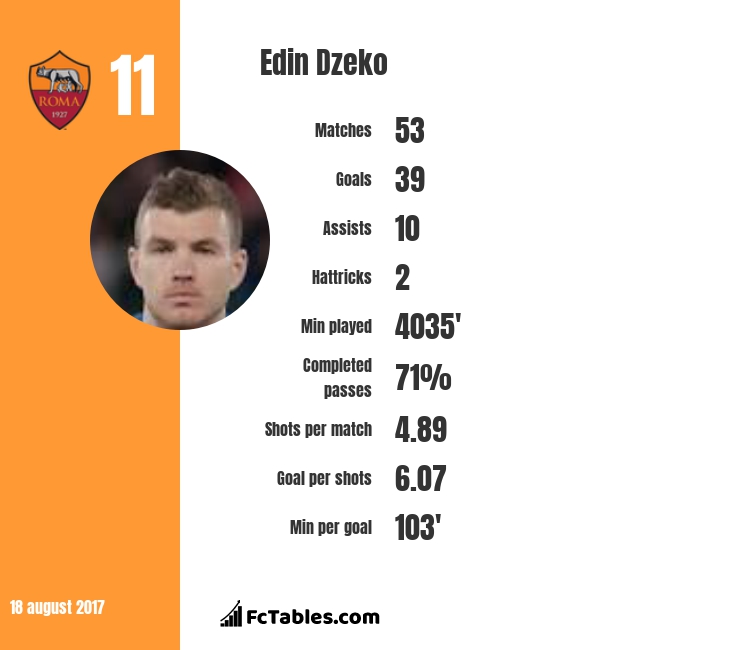 Dzeko, who is now 31 years old, participated in almost every significant competitions this season, like the UEFA Europa League, the Champions League, the Italian Cup, the UEFA World Qualification Championships, Serie A competitions and Bosnia and Herzegovina’s friendly matches. Summing up this amazing season for Dzeko, he played in the overall number of 66 matches, scoring 52 goals and noting two hattricks. His current effectiveness ranks at 75%. As many as 71% of his passes are successful, and the number of shots per game is around 4.89 shots. On average he also needs 86 minutes to score a goal. In this season he has received seven yellow and one red card, being subbed in 9 times and subbed off twice as often.

Delighting, but still not number one

Of course, the star of football, Cristiano Ronaldo, who is still popular and appreciated, is not the best. In the ranking of the best scorers of the season, he was ranked 6th. Being a Real Madrid star, with number “7” on his shirt, he is 32 years old now. Each season, however, we can observe him beating subsequent records. Earning cosmic amount of money, he is renowned all over the world, having his own museums. Usually well-liked by fans, maybe a bit less eccentric than before, Ronaldo is still crème de la crème of the contemporary football. This season he delighted us with matches in the UEFA European Qualifications, Champions League, Copa del Rey, the Spanish League, the Confederations Cup, international friendless, Euro 2016 and the Club World Championships. 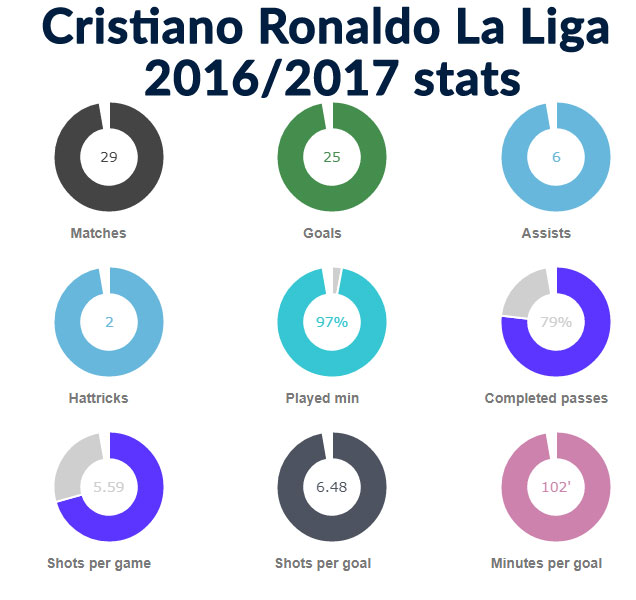 He still remains faithful to his team, playing his 8th season in Madrid. In club games the average goal is 0.91 goals per game. Also in the previous season his average was much higher and amounted to 1.04 goals per game. In the current season he scored 52 goals in 50 club games. The current season he troubled the goalkeepers with 201 shots, from which 72 were on goal. His passing rate was incredibly impressing for a striker, as he ended the season with 81% accurate passes. Cristiano played a total of 4696 minutes on the pitch, 46 times in the starting line-up. He also added 15 assists and 6 hattricks to his achievements. On average, he ends the game with 5.43 shots per game, scoring a goal every 7.44 attempts. He finds the way to the net every 88 minutes. It is also evident that his fighting spirit has cooled down, as he has received only 6 yellow cards and no reds this season. He came off the field 11 times.

Such statistics are excellent not only as a curiosity for all interesting and coveted fans, but above all for those who follow the career and progress of specific players. This is a great material for creating interesting articles and expertises. Such combinations are also great for sports betting - for specific events or for example the statistical amount of goals that a given match will have. Here you find actual list of Top 100 top scorers players in the world