They constitute the football world

It’s needless to say that without some kind of magical skills of our favourite footablers, football wouldn’t become such a popular sport worldwide. The course of any match depends fully on their skills, fitness, current disposition and mental condition. It’s always painful for us, supporters as well, to acknowledge that the player is injured or sent off because of some violent foul. We keep fingers crossed not only for the team, but for particular players as well, especially if they are somehow close to our heart. We read stories and gossips about them, follow their careers and social media accounts. They are the basis of football for us. That is why FcTables prepared such a detailed, thorough analysis of each player, which enables you to track the current and past career divided into seasons, periods or specific games and tournaments.

Compare individually or among your rivals

Each player in his team has a specific role and mission which, which he tries to fulfil as best possible, always leaving his heart on the pitch. Usually, there is a sense of specialization in the team. Each player is responsible for something else, each has different tasks and depending on their position on the pitch, they are subjects to completely different assessments and rankings. FcTables provides you with up-to-date, detailed statistics, notes and rankings..

When you enter the player-related page, you’ll see all the combinations taken into account, so all the data and rankings in which someone is classified – goals, assists, goals conceded, cards, injures etc.. All rankings can be differentiated into different parts of the world. You can organize the database so that it will show you players with the highest number of yellow and red cards, assists, goals, as well as shots on goal, shot and pass accuracy etc. You can check also the Canadian classification. We may also use a separate tab that will show only the data that interests us at the moment. Each player will definitely have other data being taken into account.

The world top scorers ranking is opened by Leo Messi, who earned his first place due to an astonishing form this season. Scoring 53 goals in all competitions this season, gives him an impressive average of 0.8 goals per game. In the case of top scorers, we will primarily be interested in the number of goals scored in all kinds of competitions of the given season. Speaking about Messi, you can also read that 80% of his passes are accurate, constituting a really impressive result. The Argentinean also takes about 5.02 shots per game and needs 4.29 shots to find his way to the net. It accounts for 79 minutes to score the goal. He also got 10 yellow cards this season and was subbed out 10 times. However, in overall, Messi spend on the field about 84% of the possible overall time. We can also get information about the player’s current club and how his career was developing throughout the years. All these messages are in some way able to give his condition, form and help your predict his disposition in the matches you want to bet on.

No surprise that goalkeepers will definitely be judged differently and other parameters of the game related to them will be taken into account when creating rankings and statistics. Panagiotis Glykos of of PAOK Thessaloniki, followed by FC Porto's Iker Casillas and Benfica's Ederson Moraes. If you look for the best goalkeeper, some completely different indexes are to be taken under consideration. Clicking on the goalkeepers’ ranking, you will find out in the first columns that Glykos ended 21 matches without conceding a goal, while Casillas and Ederson had 19 games without a goal conceded. Each of them, however, played a different number of meetings with Glykos having most matches played. As we learn more about the detailed statistics, the goalkeeper has played in total 57 games, in 24 kept a clean sheet, and conceded 36 goals throughout the whole season. Satistically speaking, Glykos concedes a goal every 117 minutes. He had also saved one penalty kick this season. In total, he spent 82% of the overall possible time on the field, received one yellow card and twice was subbed off. When it comes to next goalkeepers, we see exactly the same kind of data as for Glykos – numbers of matches played for the club and for the national team, numbers of goals conceded, number of clean sheets etc.

Here we have Christian Eriksen from Denmark, playing with number “10” in Tottenham Hotspur. According to detailed reports, this year he noted 23 assists and, with a pass accuracy rate at 80%, being a perfect result. Although Eriksen is still young (25 years old) he’s got a lot of experience, being the basic players in Ajax Amsterdam and afterwards in Tottenham and Danish national team. He had a chance to play in world’s major competitions, like Champions League, Premier League, World Championships Qualification matches, English Cup, Capital One Cup and national and friendly matches. Each season brings him closer to the world’s best players. In 65 games this season, he scored 20 goals (once even a hattrick) and had 23 assists. He played on the field 86% of the oveall possible time minutes and had a pass accuracy rate of 79%. On average, he takes 3.66 shots per match and needs around 17.38 shots to score a goal, which gives an average of 250 minutes for a goal. Additionally, he has received 1 yellow card in the season and 19 times was subbed off the pitch.

Best defender of the season

Great form presents this season a very young Tottenham Hotspur player Ben Davies. So far he played in 62 Spurs’ matches, scoring two goals and having three assists. He helped to maintain a clean sheet 17 times and lost 31 goals in total, so the average goal lost is 0.5 for a meeting - a really good result. With Davies playing Tottenham loses a goal averagely every 118 minutes. Last season, he spent on the pitch 66% of the overall time. His ball reception accuracy is incredible, reaching 80%. He’s also courageous enough to shoot, having an average of 1.45 shots per match. He also need 16 shots to score a goal, therefore he scores every 1837 minutes. This season, the player received 4 yellow cards, was subbed in 6 times and subbed off 4 times.

Most brutal players on the pitch

Fouls always constitute a very emotional moment, both the players, who take part in them and for the audience, who watches this. The bigger threat a player constitutes, the bigger is the probability of being fouled by the opposite players. In one of the FcTables you can also take a look at the most brutally playing footballers, check out who earned the highest number of yellow cards or who the referees had to send out from the pitch. Most often, the amount of unclean tackles is a resultant of players’ charisma, mental features, current form and of course the current situation on the pitch. What’s interesting, we can also find here the global stars of football, like Ronaldo, Messi or Suarez. Currently, the leader of this infamous ranking is Fernando Amorebieta, who plays in Sporting Gijon. This 32-year-old Venezuelan defender has been in Gijon for one season, playing before in Fulham and Middlesbrough, where he for sure learned a bit of the hard, English style of play In the current season, he earned seventeen yellow cards. On the second place we have Zaharia from Gaz Metan Medias with 16 yellow cards, followed by Hernandez of Alaves with 15 yellow cards and two reds Valencia’s Enzo Perez with 15 yellow cards and one red.

The most interesting combination of footballers

Among all the available rankings and statistics we can also read the current ranking of 100 best players - Lionel Messi is the clear leader, whose value as a player is calculated at 125.3 points. Here what is taken into account is the number of goals scored, as well as the number of assists, shots and successful passes. All the FcTables rankings are being updated on a regular basis, so users always rely on proven information. Cristiano Ronaldo, a Real Madrid striker, is now second with 117.3 points, The third place belongs to the Suarez who has scored 105.7 points. Then we have Lewandowski from Bayern Munich with a score of 91.8. Another place with the number of points 89.4 belongs to Zlatan Ibrahimovic playing at Manchester United and Neymar, also from FCB with the score of 83.2 points. 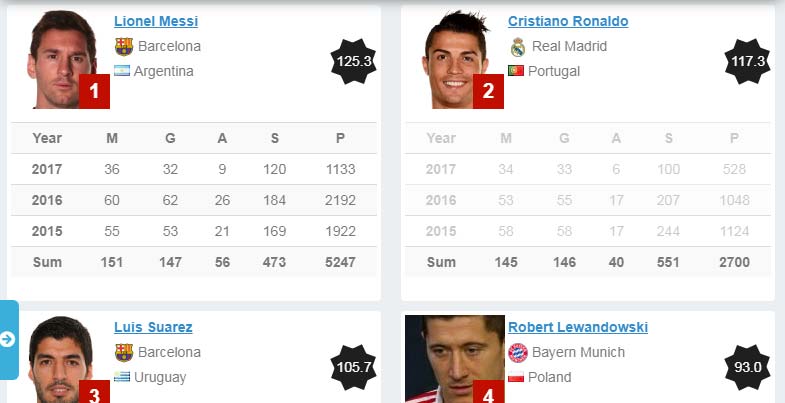