The FIFA Ranking was created to fully represent the strengths of football teams. The list shows the best teams that have won the most points in the last four years. Each match is scored separately. The ranking was published for the first time in 1993. From the beginning Coca-Cola is the sponsor of the ranking. In the FIFA classification was made many reforms and after the last change in 2014 it appears on the first Thursday of each month. Initially, at first place was Germany. In the next editions of the ranking, the leaders were: Brazil (twice), Italy and Germany (3 times). Then began the reign of Brazil, which occupied the top spot from 21 July 1994 to 11 April 2001. They were dethroned by the France, which occupied the first place for a year to release the leader position again to the Brazilian team. Below you can find average chart position of Canarinhos throughout the complete period of publication of FIFA rankings.

Recently, we noticed an increased interest in FIFA rankings but there wasn’t a site that updated the classification after each match played, so we decided to create it. So far, we had to wait for the official presentation of the best teams. Now, thanks to our service, you can easily find the FIFA ranking for the current day. It is worth to mention that the list is updated in real time. When the score in the match changes, the ranking will be updated automatically, you do not have to refresh the page. Of course, we share the history of rankings since 1993. We can also boast profiles of teams. Example: ranking FIFA Brazil, ranking FIFA Germany. On the team's profile you can check the average position, predicted position, the best and the worst position, check preview of next match, which can contribute to the increase of the points, the list of matches already played including points, and the chart of team positions since 1993. 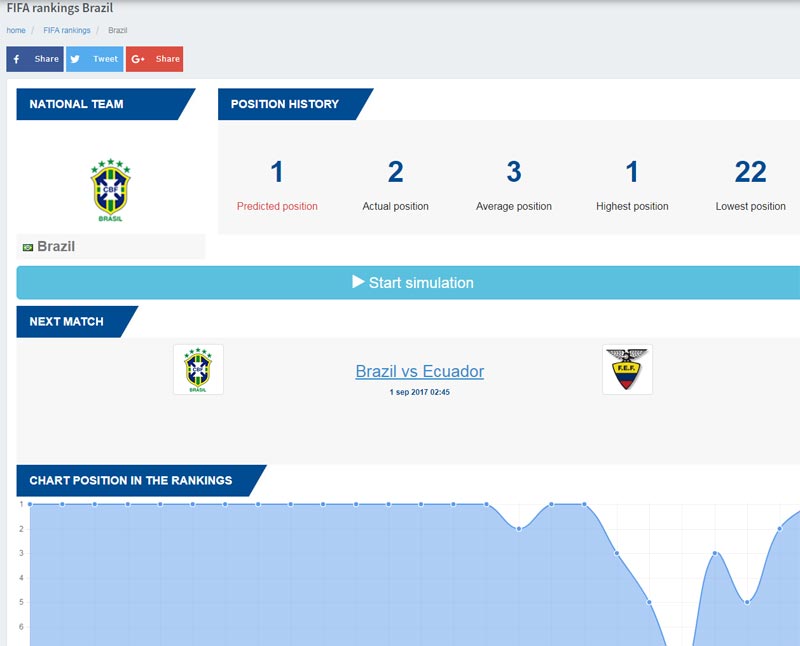 In order not to be boring we added an option to simulate the position in the ranking. You can choose teams for which you can select results of future matches, so you will be able to see what happens if for example your national team wins the next two matches, and the team from the bottom position wins only one. Such a simulation will be very useful to those who want to see what position can take their national team. How to run a simulation of FIFA rankings - see the video below.