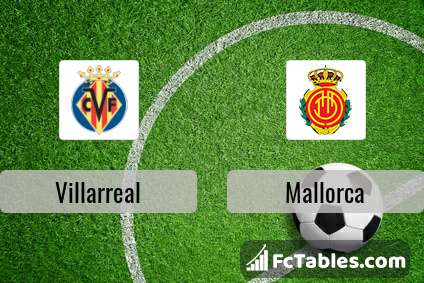 The match Villarreal-Mallorca La Liga will start today 11:00. Referee in the match will be .

Team Villarreal is located in the middle of the table. (8 place). In 5 last games (league + cup) Villarreal get 4 points. Villarreal from 3 matches can not beat any rival. Players Villarreal in La Liga with the highest number of goals: Gerard Moreno 11 goals, Santi Cazorla 8 goals, Karl Toko Ekambi 6 goals. Players Gerard Moreno 3 assists, Santi Cazorla 6 assists, Karl Toko Ekambi 2 assists will have to be very well guarded by defenders Mallorca, because they have the most assists.

Team Mallorca is in the releagtion zone of the table. 18 position. Mallorca in 5 last matches (league + cup) have collected7 points. away from 2 matches team have not been defeated. The best players Mallorca in La Liga, who scored the most goals for the club: Ante Budimir 9 goals, Daniel Rodriguez 5 goals, Junior Lago 4 goals. Players with the most assists: Ante Budimir 2 assists, Daniel Rodriguez 1 assists.