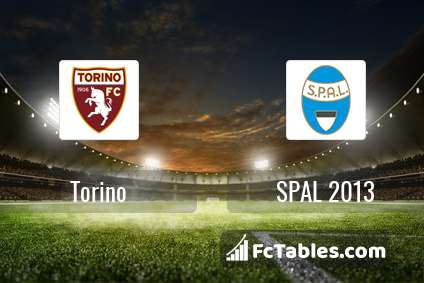 Team Torino is located in the middle of the table. (10 place). Torino in 5 last matches (league + cup) have collected3 points. Torino did not win the match from 5 games. Leading players Torino in Serie A is: Iago Falque 11 goals, Andrea Belotti 9 goals, Adem Ljajic 6 goals. Most assists in the club have: Iago Falque 8 assists, Andrea Belotti 2 assists, Adem Ljajic 10 assists.

In Torino not occur in the match due to injury: Lyanco.

Team SPAL 2013 is located in the middle of the table. (14 place). Form team looks like this: In the last 5 matches (league + cup) gain 8 points. SPAL 2013 has not been defeated away from 5 matches. The most goals in Serie A for SPAL 2013 scored: Mirko Antenucci 9 goals, Alberto Paloschi 7 goals, Federico Viviani 3 goals. Most goals developed: Mirko Antenucci 6 assists, Alberto Paloschi 1 assists, Federico Viviani 1 assists.

In SPAL 2013 not occur in the match due to injury: Federico Mattiello, Marco Borriello, Manuel Lazzari, Federico Viviani, Alex Meret.

The match will not occur Francesco Vicari because they are suspended (cards, etc.).