Team Lens is located in the middle of the table. (7 place). In 5 last games (league + cup) Lens get 10 points. from 4 matches team have not been defeated. To defend Nantes the most demanding players will be Arnaud Kalimuendo-Muinga 10 goals, Seko Fofana 7 goals, Przemyslaw Frankowski 5 goals, because this season they scored the most goals for Lens of the entire composition. Players with the most assists: , Przemyslaw Frankowski 5 assists.

Kevin Danso. They will not be able to play in the game due to suspension.

Team Nantes is located in the middle of the table. (10 place). Nantes in 5 last matches (league + cup) have collected8 points. From 2 matches away can't win a match. In this season games Ligue 1 the most goals scored players: Randal Kolo Muani 12 goals, Ludovic Blas 9 goals, Andrei Girotto 6 goals. They will have to be well guarded by defense Lens. Players Randal Kolo Muani 4 assists, Ludovic Blas 3 assists, Andrei Girotto 1 assists will have to be very well guarded by defenders Lens, because they have the most assists.

Because of the suspension of Fabio, Andrei Girotto, Ludovic Blas this players will not play in the match 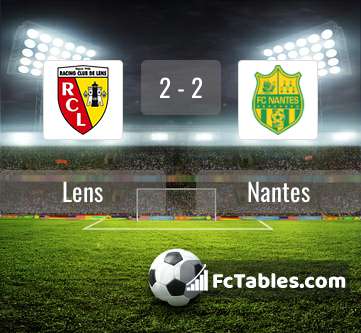