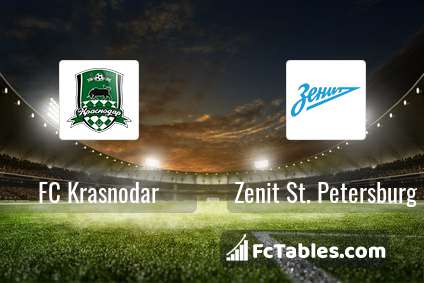 The match FC Krasnodar-Zenit St. Petersburg Premier League will start today 17:30. Referee in the match will be .

Team FC Krasnodar is at the top place in the table (3 place). Form team looks like this: In the last 5 matches (league + cup) gain 10 points. From 2 matches no lost a match. Players FC Krasnodar in Premier League with the highest number of goals: Ari 6 goals, Marcus Berg 6 goals, Mohamed Syuleimanov 4 goals. Players Ari 4 assists, Mohamed Syuleimanov 4 assists will have to be very well guarded by defenders Zenit St. Petersburg, because they have the most assists.

Team Zenit St. Petersburg is at the top place in the table (1 place). Form team looks like this: In the last 5 matches (league + cup) gain 13 points. from 14 matches team have not been defeated. To defend FC Krasnodar the most demanding players will be Artem Dzyuba 15 goals, Serdar Azmoun 11 goals, Branislav Ivanovic 4 goals, because this season they scored the most goals for Zenit St. Petersburg of the entire composition. Players with the most assists: Artem Dzyuba 10 assists, Serdar Azmoun 6 assists.

If you want to compare this teams or you looking for more stats H2H FC Krasnodar Zenit St. Petersburg
League table and stats click here 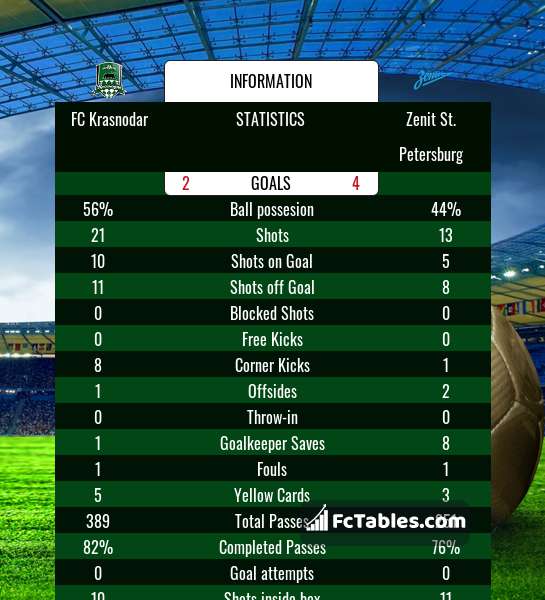 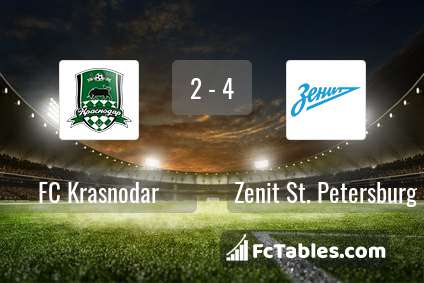