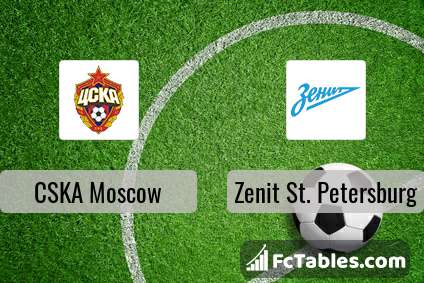 The match CSKA Moscow-Zenit St. Petersburg Premier League will start today 13:30. Referee in the match will be .

Team CSKA Moscow is located in the middle of the table. (5 place). Form team looks like this: In the last 5 matches (league + cup) gain 3 points. From 5 matches can't win a match. Not lost the match at home from 2 games. In this season games Premier League the most goals scored players: Nikola Vlasic 7 goals, Fedor Chalov 5 goals, Mario Fernandes 3 goals. They will have to be well guarded by defense Zenit St. Petersburg. Most assists in the club have: Nikola Vlasic 4 assists, Fedor Chalov 2 assists, Mario Fernandes 2 assists.

Team Zenit St. Petersburg is at the top place in the table (1 place). Form team looks like this: In the last 5 matches (league + cup) gain 11 points. from 11 matches team have not been defeated. To defend CSKA Moscow the most demanding players will be Artem Dzyuba 13 goals, Serdar Azmoun 10 goals, Magomed Ozdoev 3 goals, because this season they scored the most goals for Zenit St. Petersburg of the entire composition. Players with the most assists: Artem Dzyuba 8 assists, Serdar Azmoun 6 assists, Magomed Ozdoev 3 assists.