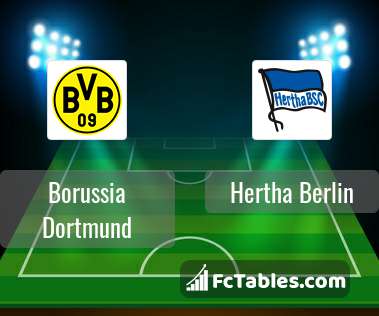 Kick off Borussia Dortmund-Hertha Berlin in 1. Bundesliga on today 16:30. Referee in the match will be Harm Osmers.

In Borussia Dortmund not occur in the match due to injury: Dan-Axel Zagadou, Mahmoud Dahoud, Marco Reus, Nico Schulz.

The match will not occur Mats Hummels because they are suspended (cards, etc.).

Team Hertha Berlin is located in the middle of the table. (9 place). In 5 last games (league + cup) Hertha Berlin get 11 points. Not lost the match away from 7 games. In this season games 1. Bundesliga the most goals scored players: Dodi Lukebakio 6 goals, Vedad Ibisevic 5 goals, Javairo Dilrosun 4 goals. They will have to be well guarded by defense Borussia Dortmund. Most assists in the club have: Dodi Lukebakio 5 assists, Vedad Ibisevic 3 assists, Javairo Dilrosun 2 assists.

Players Salomon Kalou will not be able to play in the match because of suspension (cards, etc.)