Players Alphonso Davies will not be able to play in the match because of suspension (cards, etc.)

Team Union Berlin is located in the middle of the table. (7 place). In 5 last matches (league + cup) team gain 6 points. Union Berlin did not win the match from 2 games. Leading players Union Berlin in 1. Bundesliga is: Max Kruse 10 goals, Taiwo Awoniyi 5 goals, Robert Andrich 5 goals. Players Max Kruse 5 assists, Taiwo Awoniyi 2 assists, Robert Andrich 1 assists will have to be very well guarded by defenders Bayern Munich, because they have the most assists.

In Union Berlin not occur in the match due to injury: Leon Dajaku, Anthony Ujah, Taiwo Awoniyi, Sheraldo Becker. 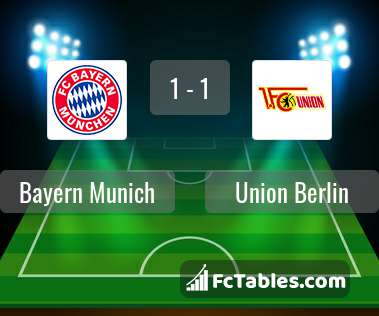