In 0 matches scored goals, an average of goals per game. games ended up winning, draws. defeits. In % matches the total goals in the match was over 2.5 goals (Over 2.5). In % matches the sum of the goals was greater than 1.5 Goals (Over 1.5). In matches Bayern Munich has not lost the goal. In games, both teams have scored goal. Average goals: per game

Direct matches: usually ended with winning of Bayern Munich. Balace of both teams games are: 31 won Bayern Munich, 12 wins Schalke 04, 11 draws. In 25 matches the sum of the goals both teams was greater than 2.5 (Over 2.5). On the other hand, 42 matches teams scored more than 1.5 goals (Over 1.5). In 22 matches the both teams have shot at least one goal.

You can read full preview Round 1 (matchday) of 1. Bundesliga here 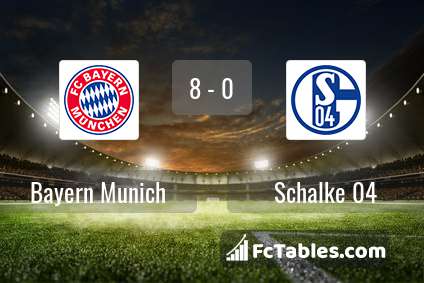