The match Augsburg-Wolfsburg 1. Bundesliga will start today 13:30. Referee in the match will be Daniel Siebert.

Team Augsburg is located in the middle of the table. (10 place). In 5 last matches (league + cup) team gain 9 points. Not lost the match from 3 games. In this season games 1. Bundesliga the most goals scored players: Ermedin Demirovic 4 goals, Andre Hahn 2 goals, Mergim Berisha 1 goals. They will have to be well guarded by defense Wolfsburg. Most assists in the club have: Ermedin Demirovic 1 assists, Mergim Berisha 2 assists.

Players Mergim Berisha will not be able to play in the match because of suspension (cards, etc.)

Team Wolfsburg is located in the middle of the table. (13 place). Wolfsburg in 5 last matches (league + cup) have collected6 points. To defend Augsburg the most demanding players will be Lukas Nmecha 3 goals, Joshua Guilavogui 1 goals, Maximilian Arnold 1 goals, because this season they scored the most goals for Wolfsburg of the entire composition. Most goals developed: Lukas Nmecha 1 assists. 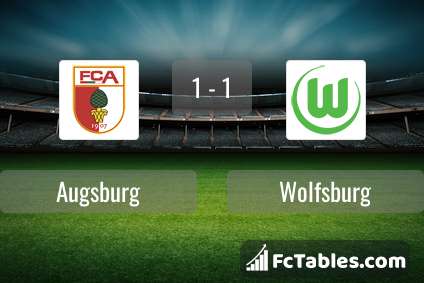