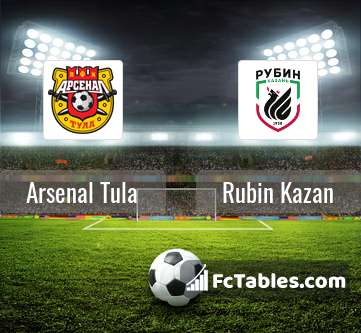 The match Arsenal Tula-Rubin Kazan Premier League will start today 16:00. Referee in the match will be .

Team Arsenal Tula is located in the middle of the table. (8 place). In 5 last matches (league + cup) team gain 9 points. In this season games Premier League the most goals scored players: Evgeni Lutsenko 9 goals, Evans Kangwa 3 goals, Daniil Lesovoy 2 goals. They will have to be well guarded by defense Rubin Kazan. Players Evgeni Lutsenko 2 assists, Daniil Lesovoy 2 assists will have to be very well guarded by defenders Rubin Kazan, because they have the most assists.

Team Rubin Kazan is in the releagtion zone of the table. 15 position. In 5 last matches (league + cup) team gain 3 points. From 9 matches can't win a match. Rubin Kazan has not been defeated away from 5 matches. The best players Rubin Kazan in Premier League, who scored the most goals for the club: Evgeni Markov 4 goals, Khvicha Kvaratskhelia 2 goals, Igor Konovalov 1 goals. Most goals developed: , Khvicha Kvaratskhelia 1 assists, Igor Konovalov 1 assists.