The most reliable information about the Premier League in one place

The most reliable information about the Premier League in one place

Since the FcTables website is the leading one, it is hard to find a second page, which would offer such high-quality statistics and tables related to football and all possible sporting events, football leagues and individual clubs, their history, as well as individual players' history. FcTables shall be a must-have for all enthusiasts of football and betting, which can be much easier in terms of individual events if you can follow all the possible statistics related to a particular team.

The site also gives you the ability to group information and all specific data contained in the tables, basing on your needs and preferences. The free edition of the service, can also serve as a great lure for bloggers devoted to similar subject or sports sites, in which we mainly focus currently, and the most important information, given immediately after their arrival.

Thanks to this, anyone who wants to be up-to-date with football teams has a clear insight into what is going on right now on the pitch.

This is definitely the case with football tables, which comprise the data most commonly used by football fans. Football league tables are today the basis for all the articles or speculations that can be made about a particular team playing in the elite of the best English teams.

What kind of information about the Premier League will provide us with the service?

It is obvious that Premier League is one of the most important competitions each season, not only in England, but across the whole continent - where football fans are, the Premier League is important and there is a need for services which will gather information about them.

What comes especially important here is to provide reliable and proven information as soon as possible. In the case of FcTables we can expect such data as: full tables and statistics related to particular meetings, as well as the info about the teams that participate in the competition. Tables that are presented on the site do not restrict users to the usual league table, because they provide tabs that allow statistics to be fuller and more informative.

Among the interesting information we also include statistics set according to the best shooters, under / over, and also Handicap, corner kicks, first half and all related data will come with it as well as many others.

Using the site is very intuitive and pleasant, providing also a convenient opportunity to browse not all the gathered information, but only those that really interest us at the moment. The statistics include both home team games and the ones played on the field trips.

All events are equally well written and calculated, so they are a perfect basis for bets on bookmakers or any other calculations, as well as an excellent source for specialized blogs, discussing the tactics and history of specific sports events or teams themselves.

The first table that appears to us is the so-called general table, where we can see the best teams of the season, with the special distinction of the first three teams and the fourth and fifth places. They are clearly marked with colors, for better orientation, all winnings, lost and draws.

The Premier League table shows at the first glance that the winning team was Chelsea, then Tottenham Hotspur, then Manchester City. In the fourth place was Liverpool FC, and Arsenal finished fifth in the table. All the listed teams are presented with their badges next to the names for the better recognition.

This might be helpful especially for those who are not very oriented in the topic of football. After hovering over any meeting result sign, the system prompts you when the event occurred. When you click on it, we move on to the history of this one particular meeting. 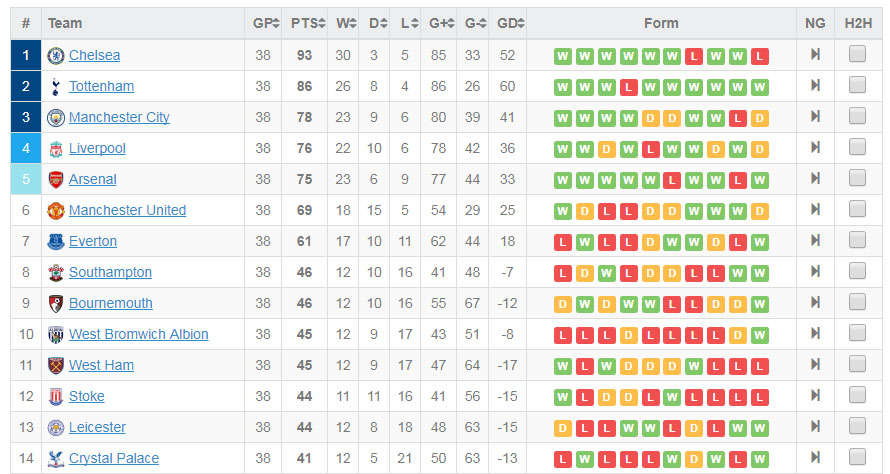 What was the odds of the match?

The page displayed after clicking on the event results gives us all the details. In the case of a match between Chelsea and Sunderland, which took place on 21 May at 15:00, and which ended in a 5-1 result for Chelsea, we know that statistically in the first half of the match two goals were scored - the first scored by Sunderland in 3rd minutes, by Javier Manquillo, and on the other side scored the goal in 8th minute by Willian. Diego Costa received a yellow card after 38 minutes.

The second half was a 4-0 win for Chelsea, with goals from Eden Hazard in 77 minute, Pedro Rodriguez goal, and two goals in the 90th minute - both scored by Michy Batshuayi. Billy Jones was one of the subs, coming in 48 minute onto the pitch.

All of this we can learn from the first two tables that show us the results of the whole meeting. From the table presented below the match result we can also find out what the matches of both teams were and in the match the changes took place in the match.

Below, we find the exact information associated with the statistics of the players on the field and on the bench, intended for this specific meeting. We also learn everything that can be statistically led out of the meeting, like for example: the time of possession of the ball by each team. In turn, the H2H bookmark is intended for all the sports betting fanatics associated with these teams. So we have here the index of matches or the current form index. See Liverpool vs Manchester United H2H

The service also makes it possible to get straight from the football league table, the most important data about the given football team. Simply click on its name in the general table and we will automatically redirect to the appropriate page.

It's also easy to pick the right and interesting event for a specific team - for example, in the case of Chelsea-London, we can immediately go directly to the statistics for the Premier League, England Cup, Capital One Cup, Champions Cup and Match for Community Shield.

At the same time we also have all the schedules divided into seasons, statistics related to the last 6 meetings, general data about their matches, as well as the schedules of upcoming and past fixtures and all the information and statistics concerning the players of a given football team.

Another suggestion is a table showing the top scorers of the season. Last season, the top 3 comprised such players as: Harry Kane from Tottenham Hotspur, Romelu Lukaku from Everton and Arsenal's Alexis Sanchez.

With each player shown in the first table on the page, you can find all the scores, goals scored and all that is necessary to take a position on the player. After clicking on the name of the selected player, we will go into detailed information about him, from the information of the player himself, to the exact statistics of all the matches played in that particular season.

We will also find all information related to the player's history, as well as the current data coming from the matches played and the statistics related to those events.

Below you find table of top scorers in actual 2017/18 season: 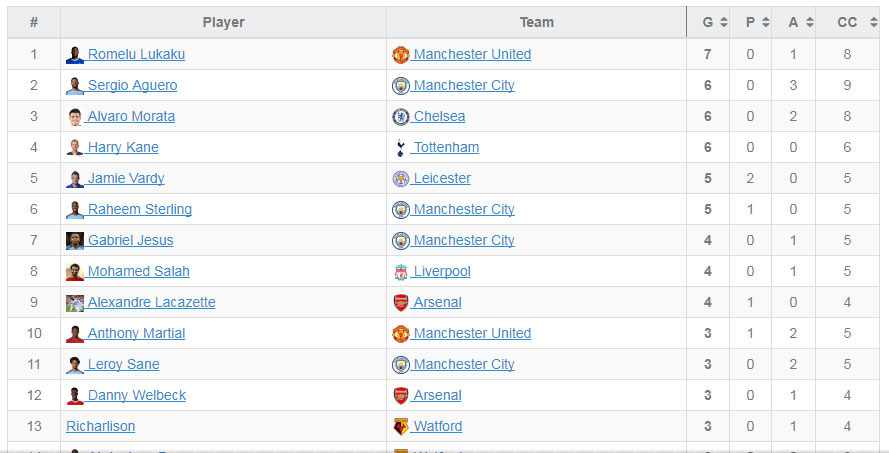 Which player received the most number of cards?

One of the most emotionally charged statistics is the number of cards that individual players have received during every meeting.

Away matches and matches played at home

The next two tables relate to the games played on the away’s ground, as well as one’s own pitch. Here we will also find all the most important data collected from each meeting, developed and placed in neat tables, easy to read and re-use for any purpose in principle.

Each of the presented tables, and so also these two, can be directly put directly on your website or on your own blog.

Score table for the first half

Another strong point of FcTables statistics is connected with each of the halves separately. Everythig that happened in the first half of the match is thoroughly analysed and described, constituting a convenient source of information. Each of the team is also accurately described and presented in various well-organized charts and tables.

Some of the information mainly concerns trivia, however, such messages and tables are viewed most favourably by soccer fans and most often they look for them just for their pleasure, without any betting or planning in mind.

All of the data, of course, is accurately presented, being displayed in an interesting and accessible way, with lot of graphics and colours, so that you can easily reach the data you currently need.

All information related to the goals scored during the meetings is divided into a total score, but also for meetings played on the trip and in the yard itself You can also get the percentage of matches in which the team scored the first goal, the number of matches - also the more shameful statistics - in which matches the team did not score any goal or match in which the opponent scored the first goal.

Each table is really well-organized in every possible way, providing reliable information and well-elaborated statistics, constituting a good base for magazines, as well as for amateurs, hobbyist or professionals. From any place in the list you can easily go to other interesting data: tables, graphs, or statistics. Getting around the site is very easy, and therefore incredibly enjoyable.

The possibilities offered by such sports-related websites are huge. First and foremost, they all keep the source of information first hand, and that seems to be the clue to this whole matter.